Ian can’t go back in time to buy things, but the next best thing is finding a time capsule. Thank goodness for collectors who found good stock years ago, bought the best they could, maintained it well, and who are now happy for it to have a chance at stardom with us.

Look for images of these items to come in our galleries and social media outlets. 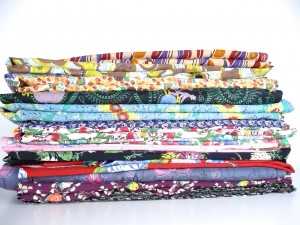 So it went with the vintage fabric destined for Etsy shop this week.

All that’s left is to enjoy it while it’s here until it’s time to wish it well as we send it on its way.

The Ian Drummond Collection will be participating in the Gladstone Hotel‘s BOOZAAR Vintage Night Market TOMORROW NIGHT – Wednesday, November 25. We are perhaps getting down here in the studio this morning listening to this mix while we *get this* mark down racks of clothing and accessories for the sale. We’ve got your party clothes for the season covered, plus some wearable and affordable daywear, and some great wooly blankets for snowy afternoon hangover naps. It’s going to be a great event – are you thinking of going?

Over the summer we received a request to send images of our 1930s hats to the wardrobe department for a feature filming in New York City.  We’re always happy to oblige – Ian’s collection of hats is world-class, but they don’t get as many chances to shine as we’d like.

The Studio, which is kept dark and covered to protect the collection, houses veritable treasures in plain brown wrappers.

While we’re always adding to the galleries on this website, when a designer asks for images, we take clear, bright shots and get them out as quickly as possible, sent according to their preference, which may be via Imgur…

When taking pictures, we may as well do it well, so we capture the hats from every angle, so as to provide as much detail as a designer would like to see.

This serves us so well. Eventually the images will end up collaged and in the galleries on this website, and they’re well-labelled and easy to send to designers for future requests.

Adding the inventory numbers and measurements is no trouble, though most designers simply send us screen grabs of the items they’d like us to pull and send, and Ian takes care that we only rent wearable sizes (or note carefully if, say, hats are smaller than 22″.)

Of course, the same goes for clothing.

Once the designer makes their choices, we carefully package the items, and provide detailed inventory lists. At least 80% of our stock has inventory numbers and clear labels for ease of checking off items upon arrival, and for returning them when it’s time to wrap things up.

Our paperwork is designed to allow for easy border crossings, and we’re experienced at shipping world-wide.

In fact, it feels really good to tick those boxes, copy those pages for the manifests, and then track the boxes and e-crates as they make their way all over the world.

This shipment left us on July 13, and made its way home yesterday.  In it was a simple hat that’s always been a good worker for us.

This hat is known to us as 2-13-12-1-76, and it’s simple, but lovely. It’s felt, in a midnight navy colour, with a grosgrain ribbon binding and trim, and a simple twist of a bow. It’s all in the shape, and the angles, and it’s extremely face-flattering.

Now, we know which film this was used in and that’s exciting enough. And certain stars in it are certainly getting a lot of buzz. It’s nice enough that many our stock items travel far and do amazing things; it’s wonderful when we catch them on screen. But there’s always an increased level of pride and excitement when something of ours ends up on a principal character.

So, we’re not going to blurt it out now, but lets just say that we’re going to be looking carefully to see this hat on a certain star, after catching her name below this Wardrobe Department notation on this label, which was left tucked inside the hat band.

Let us know if you guess who it is, but we’ll happily reveal this in 2016, upon the film’s release.  After all, we’re discreet, even when we haven’t signed a confidentiality agreement. It’s just another part of what we do. 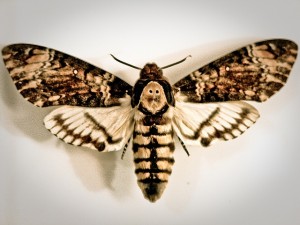 It’s “Check the Moth Traps” week at Ian Drummond Collection! It’s a regrettable part of the business of caring for vintage clothing – we are extremely vigilant, and it’s a constant battle. We are always saddened by damage and losses.

The best method we use is prevention – we check items carefully before they come in, and everything is kept as clean as possible. Yes, good housekeeping prevents moths. For a 10,000 square foot warehouse with thousands upon thousands of edible items, we have very few problems, though they do occasionally happen. 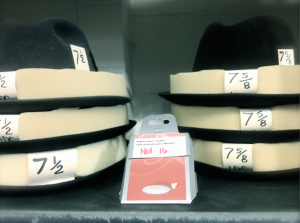 Traps only kill the adult moths – the ones we use collect adult moths using pheromones. They think it’s sexy time, but then… DEATH. We purchase the Aeroxon traps from Wotever, Inc.   It’s when we see bodies in them that we know we have to look around for what they were doing, and usually they were doing the nasty. The resulting problem is then two part – adult prevention, and also larvae-cide.

The dry/wetcleaning process, freezing and heat are some of the methods that kill larvae (we are bringing a chest freezer in as another preventative measure), and another tool in the (vintage, perfectly distressed “character” wardrobe) belt  is the dry ice method.  Adult moths are susceptible to various chemical and natural oil options, used in certain concentrations. It’s hard to be truly moth-proof – even if we have the most amazing New Old Stock wool sweaters that make that claim. 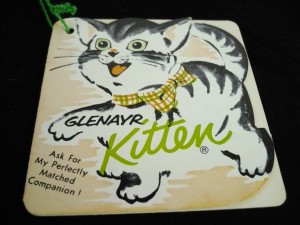 Truly, constant vigilance is key. Every time we touch something – especially a gorgeous “purrfectly soft” vintage sweater in amazing condition, moth traces are one of the things we look for.  So we offer this post as reminder: You should probably attend to pest prevention in your home soon too – after all, it’s cashmere season!

We do love our “character” items here at Ian Drummond Collection.

These vintage children’s lace-up ankle boots are one of the many pairs we have in stock, though there are few in this particular size.

That’s why we wanted to document these in their tattered glory. They’ll likely be polished up a little in the production they went out to this past Friday, and it’ll take them a few more rentals to get back to being perfectly broken down again. But that’s the nature of what we call our “living” collection! Our items, while vintage and valuable  because of how they work for us, more than for their worth in the world of antiques, are worn and altered and adjusted to make them work for the production they’ve been rented for.

When Ian shops clothing shows and vintage stores and flea markets, and estates these are the things he looks to buy, as much as evening gowns and fabulous hats and luxurious furs!

At Ian Drummond Collection, we’re always interested in catching items we rent in action on the screen. 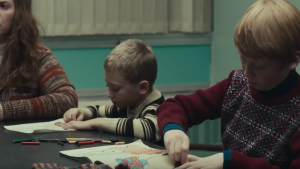 We have a different perspective when watching though – we know that wardrobe is a form of communication, and can hardly relax for our constant inner observations and analysis. 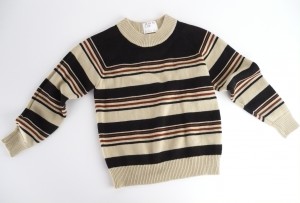 This weekend, the movie Spotlight hits theatres, and we provided a good deal of 1970s clothing for the flashbacks. Nothing speaks of the period quite like tan and brown acrylic sweaters, right?

But today, hearing all the great publicity it’s getting and being old enough to remember the story as it broke, we took a minute to pull our sweater that we glimpsed in the trailer.  All we can think upon having a closer look at it was:  That’s a 26″ chest. Those children whose stories are being told were so small and young. 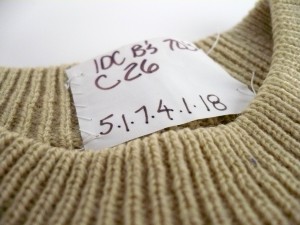 This weekend Ian is at the Ottawa Vintage Clothing Show! It should be one amazing day – and he promised when he spoke with Alan Neal of CBC Ottawa Radio’s All in a Day, he’s bringing the items pictured here.

But that’s not because they’re the best, most expensive, or most desirable labels we have – it’s because what we do well at shows such as this is to have wearable items that are relevant to contemporary fashion. These items reference the Fall 2015 Collections from Balmain for H&M, Givenchy, Dries Van Noten among others.

Victorian and Gothic-inspired items have a dark allure for those who live in winter cities – these items just need fashion-savvy people to make them their own.

Catching trends on the upswing is easy with vintage – this winter you can wear things on the cutting edge of yesteryear, that are somehow fresh again. Keep them for another 20 years, and you can hit the fashion cycle in its Influential stage again!

We’ll also have classic items from every decade from the past 100 years – all wearable, stylish (not just fashionable) and in the best condition one could hope to find them in.

Please do come to see us at the show! 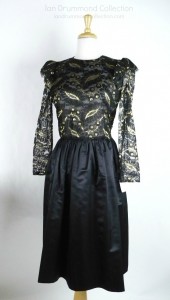 Good news for those of the Film and Television Wardrobe Department persuasion! The Ian Drummond Collection has recently added a huge selection of Stacy Adams cap-toe shoes for men in sizes 6-13, and in good assortments of browns and black to our rental stock. These shoes work for period looks from the 30s through to the present, and the quality is great. Clean and Classic and ready to rent!

The Ian Drummond Collection will be bringing our friends Pucci, Bessi, Versace and Casadei, and our pals the lizards and alligators along with us to the Ottawa Vintage Clothing Show on Saturday, November 8. We’ll be happy to introduce you to our besties.